In the past 12 years or so, the game of Petanque has risen much in popularity in France, where Marseille remains the "holy" ground of the game.

TV exposure and the excellent coverage of competitions have also drawn in new converts. Much like what happened to snooker back in the 90s.

Petanque in France is also increasingly looking international, with teams from Madagascar, Benin, Thailand appearing more and more in top competitions. Skilled petanque players can certainly be found anyway in the world. The top world's Mixed Team champion is from Cambodia! They beat Tunisia to win the title!

When you watch these competitions, there are the usual suspects. You see them often at the nationals, world championships, European contests, etc. Here is a list of them.

I hope it will help you help you recognise their talents and make it more enjoyable watching the vids. You can also google them to learn of their Petanque history and craft. The Boulistenaute site is a good "library" of them.

There are also a good crop of lady players. I will feature them when I am more familiar with them and if schedule permits.

Lacroix/Quintais/Fazzino
- Probably the best three players in France today (2017). No doubt Quintais and Fazzino are both getting on in years and growing grey. But, like Lacroix, make excellent team captains and milleur players. They all shoot and point well!

Suchaud/Robineau/Rocher
- Here's another trio of top players. Suchaud was France's top shooter before Dylan Rocher took over. Of the three, Robineau will play play captain whereas Suchaud and Rocher often operates as shooters. They seldom miss. 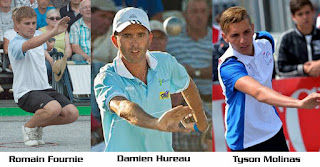 - Fournie is a fave player of mine for I find his skills rather pure. And he is a thinking player, more so than the others. However, he seems to have his clique of team partners; childhood friends perhaps. And I don't think he and Lacroix get along very well. He's more history with Robineau. Hureau and Molinas are shooters and both have very graceful and accurate swings. Molinas is hailed as the successor to Dylan Rocher and will no doubt be one of France's top shooters some day, if he isn't already. Between Molinas and Hureau, I think Molinas is more steady, less affected by pressure. Maybe it is just he gung-ho-ness of youth!

Rizzi/Weibel/Loy
- Rizzi is Italian and is noticeable for his 'Crane School" method of holding and throwing his boule. Weibel is a shooter and a good one at that. He is more rotund now and so shoots with a kind of roundabout fling that is with force. He's accurate though and has won precision shooting championships. Loy is well-known for his "high-lob only" pointing. He is accurate though with the boule landing and rolling just inches away, often near the jack. The other person I know to be VERY accurate with a high lob is Fazzino. Lacroix and Quintais are excellent also. You can tell by the titles they have won. In a recent competition, Fazzino and his team mates basically high-lobbed their way around a jack. It was very beautiful to watch. ;-)

- Lucien has a unique backspin throw when pointing. He does get the ball to stop near the jack tho, so no need for any high lobbing! Milei is noticeable for his unique way of shooting, or rather his "unique way of prepping" a shot. He raises his hand high and brings it down straight and back into a swing and forward again into line. It's fast and no nonsense as mentioned in my Shooting section. A no-fuss no hesitation way of shooting. Excellent when in competition because a slow swing can be influenced by situational pressure. Radnic is also a good pointer and found success in mixed competitions early on. He won his first all-male European triplette title five years back.

HERE ARE SOME COMMONLY SEEN TEAMS OF TOP PLAYERS:

Top Belgium Players
- The Belgium players are quite good. They gave a very good run at the 2012 World Championships in France but eventually couldn't shoot at a single boule nor the bouchon at a score of 5-7 and eventually gave six points to the French leaving behind a very short and disappointing game. They could have just pointed and protected their game. Or not switched shooters at that point in time (resting Claudy Weibel). You cannot expect a shooter to come in from the cold and perform against a top French team.

Top Thai Players
- The Thais uses a popular hooked method of holding the boule that I call the "Crane School" of petanque. It works pretty well and is easy to pick up. But the shooting can be limited to short distances, and has a "knocked on" quality. Players need to know how to flick their wrists to get a more direct hit. Also, there could be an inherent spin bias. Players have to be aware of this in their grip. Just make it more flat. Oh, Thailand have very good female players too. They have outdone their men folk by winning world championships.

Top Madagascar Players
- This team won the 2016 World Championships 2016, beating Benin. A force to be reckoned with. Madagascar played a superb end with Thailand once. Watch it here. There is another set of 5 players (3+subs) that are equally good. Recently they beat the top players in France to reach the final in Nice. Watch the match here. 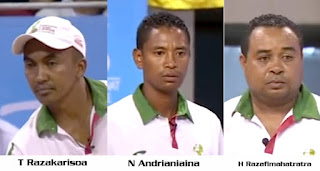 Top Benin Players
- Runner-ups at the 2016 World Championships, this Benin team is a common features often at France's master petanque events. Bio even captained a celebrity/VIP petanque match once (in 2017! Watch here)! Quite a funny match as the amateurs were swearing like sailors at their lousy throws. 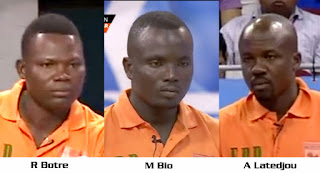 Top Moroccan Players
- They seem to have the right traditional stuff, but in the World Championships in 2012, they didn't point too well (only 47%). Little wonder they lost 13-3. You must point well to win AND rescue ends. Boudayfa, however, was excellent in shooting during that match.

Before: Petanque - Resources
Next: More on Petanque in France
Or Back To: Start Page