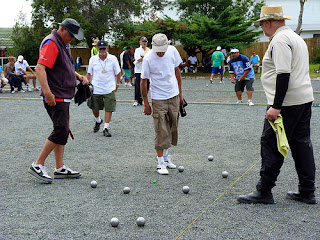 You see, Petanque as a game is not difficult to play nor understand. Throw a bigger ball to a smaller one and see who is the closest. The one with the closest ball wins the point. With three balls, you can thus win all three points during an "end". After many ends, whoever reaches 13 points wins. "Ends' are a bit like cricket. You move from one end of the court to the next. Why? Because your boules are on the other side of the court, dummy!

Now, I am assuming you are familiar with the basic rules of the game.

- To start, stand in a 50cm diameter circle and throw a jack (small wooden ball) no more than 6-10 m. Then start throwing your boules near to it. After two boules have been thrown, the losing player will have to continue until he betters his opponent's boule. This repeats until all boules are thrown.
- The players then start from the other end, why each game (not match) of petanque is known as an "end". You play ends until 13 points are reached. Makes sense, no?

Now, for rules and what not, there are plenty of sites out there. I will instead focus on how the game play progresses as you go from beginner to advanced player.

1. Roll and Hope to Win
- Now, this is how all of us would begin. Throw forward a boule and hope it is better than the boule out there. Then we start playing on different surfaces and realize "Hey, I need to master the surface type as well!" Yup, there's sand, soil and gravel, and all kinds of constructs in-between. You could end up playing on a demonstration court in a shopping mall too!

2. I Can Point, Now I Want To Shoot
- Okay, so you have come to a point where you can point but others are shooting your boules away. It is frustrating not to be able to do teh same to them yourself. You will likely "roll hit" first, finding that it works only well on flat, even surfaces but is quite terrible on uneven gravel. Well, you do get some good results but staying a "roll and hit" player means you will forever be treated as a "beginner". You need to be able to drive a manual shift to be considered a proper driver!

3. I Can Shoot, But Only Hit Sometimes
- You launch your ball at the target and sometimes it hits, most times it doesn't. What's wrong? Well, the key factors to shooting well, is Line, Release and Effect. Line and Release being fundamental. Effect is when you want to hit your target boule in a certain manner. Do I want to "carreau"? Do I want to "back spin"? Do I want to "knock on"?

Yes, when you can shoot well, it will be a bit like snooker. Applying techniques to the cue ball so it will behave in a certain manner after being launched.

4. I Want to Shoot Well
- Look up the other blog section on this. But remember, if you can get both Line and Release right, you can shoot.

I chose the photo above (from the Web, thanks) because it illustrates well what seasoned petanque players often do. Examine the "lay of play" and decide the next course of action.

In a competitive match, a three-person team (a triplet) take on roles such as Shooter, Middle and Pointer. Each has two balls equaling six per team. So depending on the balls left and with whom, the team has to decide the best course of action. "Oh, the Shooter has used up all his boules. How now?" Or "Should we point or shoot?"

Now, if your interest in petanque is strong, you will probably have watched competitive matches on Youtube. You will realize that the top players in France (or elsewhere) simplify the petanque game play into two actions: Point or Shoot.

I know, it gets boring after a while.

You watch Marco Foyot's training videos and see him do all kinds of actions with the boule: roll pointing, drop pointing, lob pointing; roll shooting; drop shooting, knock ons, direct hits (carreau), double-knock-ons, etc and you wonder how come the top players do not display any of these skills.

It is increasing looking like you need to just point and shoot.

Ok, let's forget that for a moment and progress from the basics.

Basic: Always land your ball before the jack. Best is to land your boule touching the jack. When the latter happens, we call it a "championship ball" or "hugging your mother" (in a filial piety way, lol. Not Oedipal, haha). You don't always see top players follow this rule, which is disappointing. The player to still do this is Philippe Suchard. Kudos to him. Other fellas are Philippe Quintais and Romain Fournie. Though I must admit, given that most players can shoot these days, it matters less where you point your boule. But practice does matter. A team recently lost five points straight and the match because the last player could not point well. His ball ended far away from the jack. It did not "protect" the jack at the front.
Now, usually after two balls are in the court, the decision of how to play the game starts. You have now have two balls and can clearly see who is the winner and who's the loser. The next thrower will have to decide what to do. To shoot or point again.

Shoot if the opponent boule is too near. Point if the boule is FAR and BEHIND the jack. Why?

Because if the opponent boule is behind the jack, you can point and use that boule to stop-brake your own boule. If you knock your opponent's boule, his boule will roll away typically. THIS IS WHY YOU MUST ALWAYS POINT-LAND YOUR BOULE BEFORE THE JACK!

Note: For knock-on to happen, you need to land your boule soft but just inches before. A boule lands soft if it has both HEIGHT and SPIN. It can either have the ROLL ON quality or not. But knowing how to ROLL ON the boule helps. (The opposite of the boule "rolling on" the ground is the boule "bouncing away".  A boule with no spin (and late release) will bounce away.

GROUPING
- This concept is seldom talking about, but as a beginner, you should learn to do this well. Having a consistent throw on a particular ground means your boules will all end up in the same spot. It's like how a sniper tries to achieve all shots near one another on a target sheet (or metal plate).

Why is grouping important?

Well, in petanque, we are all trying to get the boule to the jack. If you can do this all the time, hats off to you!!!

In competition, this is hard to achieve. Why? For 1) The pressure to do well will get to you; 2) The position of an opponent's boule upsets your muscle memory (it happens even to top players). This is analogous to someone telling you "not to think of a pink elephant". You invariably do. Same with a boule you are trying to better or avoid. 3) The ground may be different from what you are used to. 4) Fatigue. You could be tired from a long day of competition.

Note to advanced players: You can achieve consistent pointing under a pressure situation. What you need to do is find a "blind man's throw" - a throw which you can achieve even when blindfolded. You know, a throw where you can rely on to achieve a consistent result (distance) even without having to ever think too much about it.

I know some folks will find this difficult to accept. Why? Because they are so used to their style of play. I find that if you use a comfortable, smaller boule you can achieve a BLIND MAN' THROW better. Basically, you need to be very comfortable with your boules to the point of being "tricksy". Work on it. It will cut down on miscues/poor throws during pressure situations in a match.

For example, you can also find a way to point a ball straight in situations when you have to squeeze a boule past a pack of opponent boules to the jack. What in mahjong we call managing a "ka long".

MOVING THE JACK
- Yes, when you find that moving the jack is to your advantage. You must learn to throw your boule in such a way that it will land and roll and "carry" the jack with it. This is usually desired when all your boules are away from the jack or ended up in a particular space.

HITTING THE JACK
- When all else fails, hit the jack. When the jack jumps out of bounds the "end" is restarted. You usually do this when you are losing or when your boules are in a hopeless scoring position.

Or you do this when the opponent has more boules left than you. BUT NOTE THAT YOU STILL NEED A BOULE IN HAND WHEN THE JACK FLIES OUT. OTHERWISE YOUR OPPONENT'S BOULE(S) IN HAND WILL COUNT AS THE POINTS.

In other words, hitting the jack helps prolong the game and lets you survive to play another end.

THE UNCERTAINTY OF PETANQUE
- Petanque may be a game of skill, etc. But because of an uneven surface and the fact that the jack can be moved - intentionally or not - an amount of uncertainty is introduced. Titles have been won and lost because the jack has moved. When the jack moves, its distance to the boules have changed and hence the scoring. It is good to bear this in mind when pointing or shooting boules very close to the jack.

I find sometimes top players don't pay attention to this fact. They should train to shoot either side of the target boule and not leave everything to chance.

It is not enough to just hit a boule. Try to eliminate or introduce any uncertainty into the game, often at a critical stage.

YOU CAN GET EXTREME ACCURACY WHEN SHOOTING. Philippe Quintais, Philippe Suchard, Diego Rizzi, Christain Fazino, Dylan Rocher and Claudy Weibel all can do this to a certain extent. But not all precision hitters can do it. Damien Hureau can't, and I think Tyson Molinas can't either although he is young and can still improve.

Having a larger boule helps but I think it is more down to technique.

(Throwing a larger boule - say a 75mm one - is certainly different from throwing a 71mm one. And have you noticed? French top players are moving to smaller boules and there are good reasons for it.)

BACK TO THE PICTURE ABOVE
- Ok, so everybody has their boules on the ground; you have the last boule in hand. What are you going to do? Point or shoot? (See section below)

LAST BOULE DECISION
- The score is 12-11. The opponent has THE point to win. What are you going to do? The usual action is to shoot.

Note: It is always better to lose by one point in petanque than more. Sometimes - especially when no one in your team can shoot well, it is best to lose a point (especially when the opponent's boule is in a "championship boule" position, i.e.hugging or darn near the jack). Try to catch up in the next end. Kind of like "survive to live another day". - Another end, that is.

NOT FAMILIAR WITH THE RULES OF PETANQUE?

Watch this video for the finer points in playing petanque on a regular basis. For example, how many times can you fill a hole in the ground during an end?