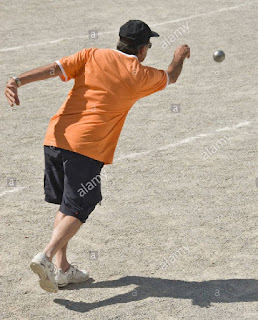 Ok, after being introduced to the game of petanque, the first thing on your mind is: Ok, so how do I throw this rather heavy metal ball?

If you want to progress well into the game of petanque, know this now. You do not throw the boule any more than you would throw a tennis ball.

I know, we all use the word "throw". Let me explain.

As you progress further into the game of petanque, you'll realize that just "throwing" the boule is not going to get you anywhere. It's like marrying that first boyfriend and think he is a keeper for life!

You need to make a list if you are to get that right!!!

It's the same with petanque.

Note that you actually roll the ball off your hand and fingertips.

ROLL THE BOULE OFF YOUR HAND AND FINGERTIPS!

QUESTION: In golf, do you whack the ball to get it where you want it to go? No. You master the swing in order to hit the ball. It's the same in petanque.

You have to master the swing.

Swinging the boule in your arm is easy...Any monkey can do it.

The next thing to learn is: Release.

When do you release the boule in your hand? (I can ask the same question in ten-pin bowling.)

To answer this question, you have to wonder about your grip.

So the three factors to a boule throw are these: SWING, GRIP, and RELEASE

SWING:
- The traditional wisdom is the slow swing take back. How high? The higher, the further your boule will go? Yes and no. Speed of follow-through matters also.

The faster the follow through, the lower your swing back.

DOES SPEED OF THE SWING BACK MATTER?
- Yes and no. You can do a slow swing back. Or a fast one. Answer: It depends on your own comfort. BUT, a general slow swing back allows you to size up your throw. Folks with a quick swing back already know their throw well. No need to hesitate or size up.
- The slow swing back is also useful when your grip pressure is more than usual resulting in an early release. Watch Henri Lacroix, Philippe Quinstais, Romain Fournie and Philippe.Suchard. Those players - esp the Thais - who adopt the Crane School grip, will swing back slow. A slow swing back is when you need to release the ball earlier. Trust me, in this instance, a slow swing back will give you better accuracy.
- A fast swing back is good for those who have already an established, fixed swing. These players usually have one kind of throw. They will only manage the release to get the boule where it wants to. Folks Like Damien Hureau, Tyson Molinas, etc. Actually these two chaps have the loveliest throws in petanque. BUT, so far Molinas is the more consistent of the two. IT MATTERS ESPECIALLY DURING TETE A TETE COMPETITIONS WHEN YOU NEED TO MANAGE YOUR SHOOTING TO HIT AT ALL DISTANCES AND WAYS.

Philippe Suchard is probably most noticeable in this during competitions. He will call on a carreau in critical situations. As does Christian Fazzino. But both do it quite differently. You can too if you know how.

A SHORT SWING BACK
- A short swing back is possible, but it has to be matched with a comparable follow-thru speed. That in turns demand an appropriate proper release.

Answer: Find the movement that best suits your comfort level, body type, temperament, etc. Doing a no-nonsense fast swing back can help you avoid "weak arm syndrome" when pressure builds. It is never good to feel weak in the arm during a competition. It happens when doubt seeps in. Work on your grip pressure and release instead (tip for advanced players!).

PREP BEFORE A THROW
- Watch how Henri Lacroix and Philippe Quintais set themselves up before a throw. It it more than just pulling up your pants like what Fazzino does.

These folks are usually very accurate. This is the reason why they are often captain of their teams and relied upon to rescue their comrades in a crunch, especially when they have to shoot in the last and needs a "hero" shot. Folks like them are the best "milleurs" or middle players who can both shoot and point. I would advise advanced players to aspire to be like them.

Mannerisms:
- Some players hook their grip before a throw - like what Romain Fournie is doing these days. He didn't used to do that when he was younger.
- Pointing your fingers (with thumb at side of boule) down at the beginning of a throw does help achieve a good line.
- Sougir from Youtube (he's a popular figure in petanque instruction) has a "claw" prep-method that serves him well.

NO STRAIN THROW
- Whatever it is, your boule "throw" should not be a strain to your hand and arm. If it is, then you are definitely doing something very wrong. Remember: Just as in golf, having a good swing matters in petanque too!

RELEASE AND ROLE OF FINGERS
- Release is the most brainless act in your "throw". Yet, it affects accuracy the most. Why? The position of your thumb matters. In some grips, especially the Crane School, the position of the thumb has to be adjusted for distance.

If you have been a racquet player all your life, do check the alignment of your fingers. They (and the wrist) could be skewed one side from holding a racquet in the ready position all the time.

- Does keeping your fingers close matter? No really. It helps when you want to ground-roll your ball. When do you ground roll your ball? When you want to knock-on a boule usually. Or carry the jack some ways.
- You could "claw" cradle your boule, swing back and still shoot well. It's all a matter of keeping your grip consistent. Remember: In any mechanical set up, consistent action bring consistent actions, hence results. The more you practice, the better your muscle memory.

Next:  Shooting the Boule
Before: Game Play
Posted by TC Lai at 12:02