Haha, this meeting is too historic to not make parody of! 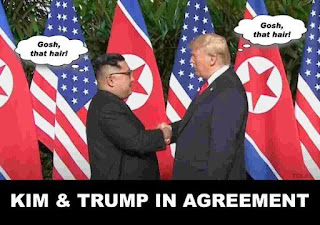 Interestingly, the colonial era barracks that make up part of Capella Hotel - where this historic USA - North Korea meeting took place was where I had organised a midnight treasure hunt for my graduating engineering classmates in the late 80s. It was an abandoned and decrepit place then. No running water, no lights, piled with rubbish, fallen beams, etc.. which made for a very suitable horror-type of treasure hunting place. Surely many of my coursemates were scared shitless, but that was part of the fun. We went about with candles and flashlight. Back then Sentosa island was a place where local folks went over to swim, camp or rollerskate. Later this Tanah Merah barracks (so-named) was spruced up and used as a set for Masters of the Sea, both Asia's and Sg's first TV series in English in the early 90s.
Posted by TC Lai at 21:36