A response to a bombshell of a sibling quarrel over the weekend (Sunday being Father's Day). A coup by a brother, if you like, while the other sibling is out of the country. And a complicit sister. 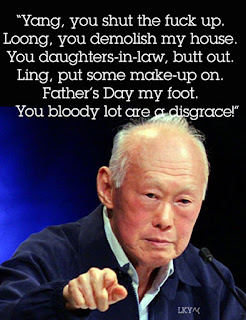 Some associated links on the matter:

Basically, the late LKY's estate is divided equally amongst his three children. Initially it wasn't so neat a ratio. It was divided into 7 shares, with each sibling getting two with the remaining single share going to the daughter LWL. The rationale is that she is unmarried with no children and thus the extra share is for looking after her old age.

Now, apparently the last will of LKY has reverted back to the equal share idea (6 parts, 2 each) but with the provision that LWL could stay in the Oxley Road home as long as she wanted. Once she decides to move out, the place can be demolished as per LKY's often acknowledged  wish. LKY is more for remembrance on performance than on personality worship.

Now this demolition wish of LKY is not a firm thing. Apparently he has not included this wish in his previous wills except the first. That it found its way into the last will is what this argument is about.

LHL is curious why LHY's wife is involved in the drawing up of the will when the usual drafter is their cousin Kwa Kim Li. LHY denies his wife drafting the will but only acting as advisor and council. Kwa however denies writing the will. It appears she was only appending to the will what she was told by LHY's wife. Now, this issue itself is contentious. It means someone is lying.

LHY and LWL beef is why their brother is not respecting their father's wish to have the place demolished. Instead he has appointed a ministerial committee to look into how the place may be preserved. ("Place" or some kind of manifestation, this is not clear). It is understandable why LHL is doing this. LKY is a widely respected and honored politician in Singapore. Heck, he is THE founding father of modern Singapore... leading a team to turn a swampy port of call into a modern metropolis where everything works. Just ask the expats, ask the residents, ask Singaporeans. You may not love LKY, but you certainly have to respect him. He got things done, and he as a frugal man.

World leaders hold LKY in high esteem for his intellect and views on world affairs. I respect LKY for his love of the grassroots, the common folk. All he wanted was a place where a man could get an education, get married, have a home and a job. A safe place to do all that.

I've done some policy case-writing and learned a few things more than the average man regarding how Singapore is governed. And one thing I respect of LKY is him keeping his word. An example: when he cleared the hawkers off the street (for hygiene purposes) he built them hawker centers where they could sell their food/wares in a managed environment. And guess what, the HCs remained mostly in the same areas where the hawkers plied. Why you oddly see hawker centres in the Central Business District, a prime real estate area. The same applied to housing. Why you see HDB blocks again in the CBD or near-CBD. It is LKY's ability to manage people's expectation and life changes and growing the country at the same time that makes me respect him more. Certainly in a world where greedy leaders grab land, destroy people's homestead to build useless national projects or pocket money intended for economic projects, Singapore seems like heaven. And it is. As I've told folks often. You have a safe and un-intruded space to live, work and play, what else do you want?

Of course, Sg is not a place for political parties to flourish. None had done as good a job as the ruling party. (Truth be told, they weren't given a chance. You were either on the ruling party's manifesto or you are not. Then again, Communism was rife in the early history of Sg. And we know now how communist countries turned out.) So, whether you love LKY or hate LKY, you have to respect him. And perhaps wish there are more of him in the world today.

And for those of you who think Sg is homogeneous, think again. We have four races: Chinese, Malay, Indian and Others (eg. Eurasians). We are all educated in English and speak to one another thus. The Chinese each know their dialect but is tasked to learn Mandarin to speak to one another so no one dialect is deemed superior to the other. Growing up Singaporean is like a British kid going school to study in Russian and then speaking French at home. Who else in the world does that???

So you can understand if there is a lot of pain growing up in Singapore. But the 70s and 80s were economic "miracle times". High employment, good jobs, middle class growing, affordable housing, etc. And a country growing richer (GDP) by the year.

Yup, one thing I learned from the Singapore experience is that when a country is rich, it can do a lot for its people. Housing, good schools, amenities, etc. When you have a leader, make sure he knows his sums. And make sure he is incorruptible. Look at a neighbouring country. Enuf said, is what it is.