Of D&G, PG and Koteka 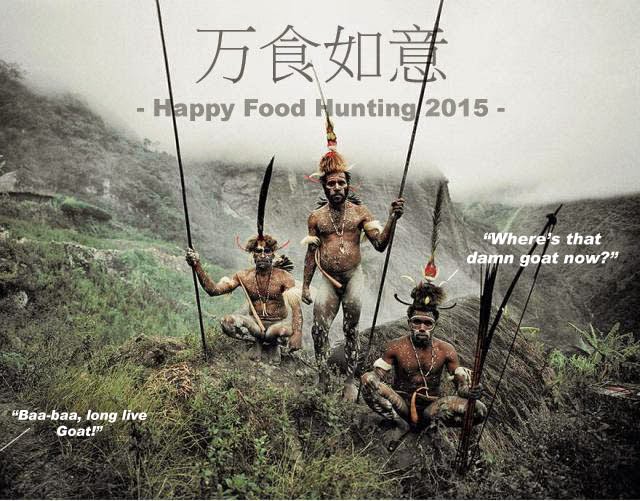 (A chap goh meh eve short story) ;-) Meanwhile, in a village in Papua New Guinea.... "Come here, son," motions a father sitting on his mound of dirt. The son rises and approaches, leaving his own small mound of earth as befits his lower status in society. "Yes, Papa," says the boy, barely thirteen but with eyes already roving. A girl nods shyly at his attention and giggles and then runs to hide behind a tree. "It's about time, son," says the elder man, not missing the hot flush scene that's just happened. "Time for what, Papa?" inquires the son, his voice barely breaking. "Time to have your own koteka," says the man, as he taps his smoke pipe against his own penis gourd eliciting a tok-tok sound. In other cultures, that tok-tok sound would have summoned a bowl of hot piping noodles. But not here. Here, a woodpecker might respond. The son eyes his dad's koteka and beams. He has always hoped to own a symbol of manhood like that. But times have changed. It's the era of handphones and tighty-whities, not jungle drums and heaven accusing kotekas. "Dad, cousin Mosbig's papa got him not a PG but a D&G for his coming-of-age birthday!" "What D&G?" asks the man, vaguely remembering a bus-stop ad in town of a male model in strange mid-rift attire. "Didgeridoo & Gourd, dad," the boy says. "It's the fashion these days!" "Son, what D&G?" decries the father. "Your grandfather before me and his father before him all wore their PGs with pride. It's the way of our peoples," he says, eyes burning with a rage that can only be fuelled by heritage. "What will we all look like if we all wore da white D&Gs? It's another white-man evil intention to make us more white!" laments the father, who has last year lost a daughter to Wacoal's wonder creation. "Look at those women over there, harnessed like working horses! I say no. We are a free people. We must swing like the old times!" With that, the elder man swung his koteka left and right, turning it somewhat into a fungshui dial. Of what that portends, the sky now intends to announce. It turns a shade purple and pelts the village with raindrops the size of, well, raindrops. "Look at your cousin Mosbig's tighty-whities. They are now all brown with mud and rain. And he is chafing between the thighs. What does that tell you, son?" The son looks at his cousin Mosbig with both admiration and discomfort. Cousin Mosbig was called his name for a reason and it was not for his nose, feet size nor monstrous tongue. If he had worn a PG, he would appear to be a saxophonist in a Western symphonic band caressing his instrument like a farmer his winning squash. Yes siree, Mosbig is the pride of the tribe but even he has betrayed tradition opting for D&G instead of a PG. Mosbig is also hopping around like a cuscus on heat his inner thighs rashing worse with every clap of thunder. Hmm, it seems dad is right, muses the son. And so, with the rains over, father and son travel to the fabled gourd patch of Amungme Mountain just like his father had done so with him and his father before him, to find the right koteka for his son to begin his manhood with. After that, his spear, quiver and so on. Like some back-to-school Bata advertisement in some other culture. At the Amungme gourd patch, an ancient lady welcomes both father and son. She signals to her helpers who are semi-naked ladies skilled in the art of gourd fitting. An agreeable one is summoned and she leads the young man into a hut. "As with tradition, that lady will pick him a gourd. And together, they will empty the gourd of flesh and celebrate with gourd pie and drink. She will teach him all there is to know of gourd care, sheathing and unsheathing. By the time she is finished, your son will soon be a man, ready to face the world with his gourdliness. And he will know how to treat his women right." Saying that, the ancient woman turns to sacred Amungme and bows. The father nods in agreement, as he himself has gone through the same ritual many moons before, although the memory of it now is infused with red light, strange incense and no small amount of crotch slapping. Crotch slapping? Oh my! At that thought, the father blushes and feels a burning sensation down south. Wearing a PG does require rigid training - as rigid as regimented military training. And these gourd ladies are so professional about it. After all, if a man cannot wear his gourd upright, he will only trip and fall. Literally and metaphorically. It is not something to sniff at. It is said a woman holds the sky up with her back. A man in Papua New Guinea holds it up with his gourd. The end - TC Lai
Posted by TC Lai at 06:31