Legend of the Shrimp Paste Boy 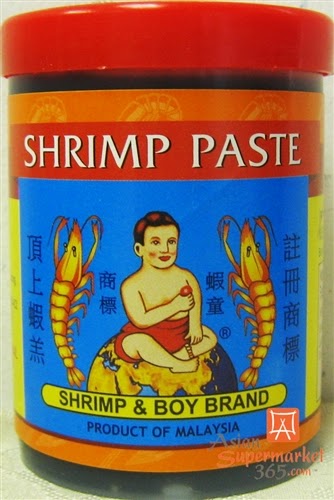 Legend has it that he was born in a fishing village not far from Desaru. There were signs that day that the boy was blessed. A giant frog standing in the doorway and leaving a puddle of water; a giant snake slithering by and hissing and gobbling up the frog. In the sky, majestic clouds rose to signal his arrival. Afterwards, they turned an angry grey and unleashed rain for one whole week, turning an auspiciousness occasion into something suspect.

Throughout the ordeal, Baby Boy did not feel at all afraid. He giggled and gurgled as if nothing out of the ordinary was going on. More worrying, he appeared to be in communion with something or someone far greater. Dark shadows would appear in places where there was light. Baby Boy would then call out "darth-darth" and breathe heavily.

However, his parents were nonplussed. Their overriding concern was the boy peeing too much. It got so bad that his grandparents stopped carrying him and nicknamed him lai lui ha, which, in their dialect, means "peeing prawn". The term actually refers to a kind of mantis-like prawn that lets out a stream of water whenever it got stressed. I might pee too if my life was threatened!

At one stage it got so bad that the old couple ran out of dry clothes to wear. They had to sit int he hall wrapped in their sarongs. The non-stop wet weather further aggravated the situation. Laundry remained damp and after a while, they smelled.

The old couple now looked at Peeing Prawn with the sort of emotions grandparents have for certain grandkids: a mixture of gladness and nuisance.

Growing up, Peeing Prawn's urinary habit did not abate. Fellow toddlers refused to play with him especially when building castles on the beach. Peeing Prawn would wet and bring every castle wall down. Understandably the village kids liked their sandcastle moat to be filled with toy dinosaurs and crocodiles and such like - not some kid's putrid pee. In reality, the stuff was much worse. Seagulls would go cross-eyed, clams would cough their innards out.

Pretty soon, Peeing Prawn was left to play all by himself. Crabs and curious prawns roaming the surface became his only playmates.

As time passed, a kind of reverse evolution happened. Peeing Prawn got drawn closer and closer to the water's edge. He eventually ended up playing in the sea and going to the Mantis Prawn Kingdom to find more playmates. It all seemed like a fantastical scene from a Hayao Miyasaki Japanese anime but this was all Asian and kampung folklore.

Peeing Prawn became very happy. He never felt more at ease, more at home. And as time passed again, the weird osmosis thing continued. His back began to exhibit a dark strip. The other prawn playmates were proud, noting that Peeing Prawn was indeed becoming one of them. But as maturing teenage prawns are apt to do, they also teased him in a rite-of-passage way. "You are so full of shit!" "Your head is bigger than your body!"

At times like these, Peeing Prawn gurgled heartily in appreciation. He would then bless his friends with his golden spray that could now reach a spurting distance of five metres. Six, if current assisted! Ah, so, boys will be boys, it is oft-said.

But even as Peeing Prawn became more crustacean, his old habit remained. The happier he was, the more he peed, which his playmates had come to ignore and accept. A few of their faces were already yellow-stained, making them seem like the sweeter kind of prawn folks used in their steamboat meals. Why they tolerated him, only they can explain. Perhaps they figured worse things could come out of him, stuff like hurting words and maybe even the logs of No. 2!

One day, an overjoyed Peeing Prawn ignored the frantic, warning pee motions of his pals and got swept up by a passing trawling fishnet and brought back to his village.

His parents were relieved to see him even if he was somewhat wrinkled from all that time spent underwater. Other relatives felt the same and nicknamed him "Sharpei Boy"; some just gave him the stinkeye. His grandparents returned to doting on him and gave him Rabbit brand milk sweets to eat. They also fed him brand new milk formula powder from China.

However, unaccustomed to his new diet, Peeing Prawn grew weak. His daily stream of putrid pee became a fizzle and he eventually passed away. The dark strip on his back turned pale and stopped throbbing.

However, the villagers thought otherwise. They believed the death of Peeing Prawn had brought them a sort of blessing and a great gift. They decided to create a paste from all that generous shrimp from the gods on the beach to remember him by. They decided to make a blackish paste as a tribute to the boy with the special dark strip on his back.

So, even as the myth was believed by some to be more crap than actual, they would nevertheless rejoice in the partaking of this delectable shrimp paste, which in dialect is known as "ha-gou" or "hei-ko".

It is excellent in rojak and in popiahs. And when applied on paper it can be used to trap rats even!

Chefs often wonder how they ever got by without this celebrated paste in much the same way they wonder about a rat finding a way into their kitchen!. SBM members too will agree on the importance of flavouring great many dishes with this paste... foods they have come across in their culinary adventures. For now they can rejoice in knowing the legend behind the paste!