What Low Tostesterone Means In Men 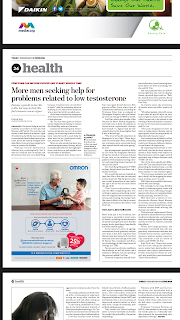 Page 26 health
TODAY • WEDNESDAY 8 JUNE 2016
A COMMON AILMENT
It is estimated that about one in four men aged 45 and above in Singapore suffers from some form of testosterone deficiency. More men seeking help for problems related to low testosterone

SINGAPORE — Persistent fatigue and an
inability to perform in bed spurred
58-year-old Patrick Tan (not his real
name) to seek medical attention. Aged
47 at the time, he felt he was too young
to experience these bothersome symp-
toms, which he initially thought were
side effects from previous surgeries to
treat an overactive bladder.
“Having erectile dysfunction
affected me psychologically. But it
was the constant lack of energy and
drowsiness that was very disturbing
Patients, typically in late 50s
to 60s, but some in their 90s,
find treatment renews vigour
SYMPTOMS CAN INCLUDE FATIGUE AND ‘FLABBY’ MUSCLE TONE
because I used to have a lot of drive
at work,” said the managing director
working in the electronics industry,
who is married with two adult sons.
Blood tests revealed the symptoms
were due to lower-than-normal levels
of testosterone.
Mr Tan has since gone on testos-
terone replacement therapy to restore
the dwindling male sex hormone.
Instead of dismissing low testos-
terone symptoms as part of normal
ageing, an increasing number of men
have come forward to seek help for
what used to be a hush-hush condi-
tion, doctors told TODAY.
More are also enquiring about tes-
tosterone replacement therapy, which
is usually administered through injec-
tions, oral doses or gels applied over
the shoulder or abdomen.
It is estimated that about one in
four men aged 45 and above in Sin-
gapore suffers from some form of
testosterone deficiency, according to
Professor Peter Lim, a urologist at
Gleneagles Hospital, who said thera-
py costs an average of S$150 a month.
Prof Lim, who is also founder of the
Society for Men’s Health Singapore,
currently sees at least 40 patients on
testosterone replacement therapy
each month — a figure that he esti-
mated is four to five times higher than
it was a decade ago.
“The level of health education in
Singapore is very high. These days,
men are more open about discussing
sex, and seem more concerned about
their sexual health and male ageing,”
he said.
Age management specialist Julin-
da Lee from the Singapore Medical
Group has noted an increase of about
20 per cent in the number of male
patients with symptoms seeing a doc-
tor and enquiring about treatment in
the last five years.
Tan Tock Seng Hospital’s (TTSH)
urology department has observed a
similar increase.
Dr Lee said the men are typically in
their late 50s to 60s and are married
or have a partner. But the doctors also
see a small proportion of men under
the age of 40 as well as those above
the age of 90.
“One 91-year-old patient came
into the office complaining that ‘eve-
rything is useless and nothing works’.
Once we replaced the testosterone, he
was up and running. In younger men,
the cause is likely to be due to cancer,
infection or trauma to the testes,” said
Prof Lim.
NOT JUST A SEX HORMONE
More than just a sex hormone, tes-
tosterone is essential in men’s over-
all health, including the maintenance
of muscle strength and mass, healthy
energy levels, good sleep, bone health
and even mental agility.
In the natural course of ageing,
testosterone levels gradually decline
over time; it has been reported that
the hormone decreases by 0.4 to 2 per
cent each year after the age of 40, said
Dr Ronny Tan, consultant and direc-
tor of andrology in the Department of
Urology at TTSH.
Factors such as chronic conditions
like diabetes, as well as stress and a
sedentary lifestyle, can also speed up
the process, added Prof Lim.
Common symptoms include erec-
tile dysfunction, loss of morning erec-
tions, lower sex drive and energy lev-
els, said Dr Tan.
But many patients who are testos-
terone-deficient also tend to display
classic physical signs such as “flab-
by” muscle tone and a paunch, due to
increased fat around the waist, said
Prof Lim.
In extreme cases, the severe loss
of muscle mass can affect quality of
life.
“My oldest patient, who is 95, came
to me when he was 85 with an unu-
sual complaint of pain at his tail bone
which turned out to be related to the
wasting of buttock muscles, common-
ly seen in low-testosterone patients,”
said Dr Lee.
“The pain disappeared after he
went on replacement therapy and an
appropriate exercise programme to
help him build muscle mass.”
Low testosterone is linked to a host
of health conditions including osteopo-
rosis, heart disease, diabetes, demen-
tia and lower life expectancy.
By replacing testosterone to nor-
mal levels, the men do show improve-
ments in their health with respect to
blood pressure control, sugar control
and lower risk of heart diseases, said
TTSH’s Dr Tan.
One of the most significant differ-
ences Mr Tan experienced after sup-
plementing the male hormone — in the
form of injections administered every
three months — was renewed vigour.
“I’m a lot more energetic now and I
don’t think I will be stopping the treat-
ment anytime soon,” he said.
Still, there are possible risks asso-
ciated with the therapy.
For example, it can cause fertility
issues by reducing sperm count and
size of the testes, affecting younger
patients who have not completed their
family planning, warned Dr Lee.
Men who have a history of car-
diovascular disease (heart disease
or stroke), prostate problems, sleep
apnoea or cancer should also be par-
ticularly careful about starting the
therapy, she added.
Testosterone replacement thera-
py should be administered by trained
medical professionals, and patients
must also undergo regular follow-ups
and blood tests to monitor potential
side effects.
When used appropriately, the
treatment can benefit men who are
genuinely testosterone-deficient but
it should not be used as a preventive
measure against ageing concerns.
The treatment is not an “elixir of
youth”, said TTSH’s Dr Tan.
Said Prof Lim: “Some men come
into the clinic asking for testoster-
one to make them look beefier or to
enhance their sports performance.
If their testosterone levels are nor-
mal, why would they need treatment?
That’s bad medicine.”
Posted by TC Lai at 22:59