A retelling of the famous tale quickly inspired by this pix of belacan shrimp paste. ;-) 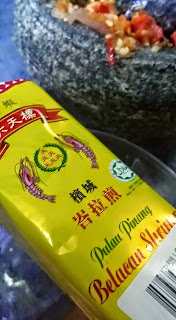 Ali Baba was a lad who had a thing for curly toed shoes. He was also fond of dark eyeliners the kind often worn by Jack Sparrow, a famous pirate. Of these customs, Ali Baba's father was most upset. "Why is my son so chibye fay one?" he would lament, throwing an adjective commonly heard in the local pasar malam. Being a traditionalist, he couldn't understand the trendy habits of the young - nor their youthful need for identity. In his days, kids would just yearn to own their very own camel, that's all. But these days, kids want to win Arabian Idol and be popular with the girls in all kinds of ways. Doing tattoos or even dying their hair in weird colors. Or be a slouchy guy with floppy hair like that Berber boy and mouthing "Baby, baby ooh..." from every conceivable street corner.

One day, Ali Baba decided to go to his favourite man-cave to practise his vocals. The cave was pretty large and had a hole at one end to allow for echoes to fade most elegantly. This suited Ali Baba very well and he could sing songs with a vibrating and emotive timbre, not unlike Elvis whose influence traveled farther than his own passport ever did. Yes, Elvis was a homebody. His sandals never caught the sands of Arabia; only pet shit on the lawns of Graceland.

Suddenly, during a lengthy pause between notes, Ali Baba heard some noises coming from an adjoining cave. At first he thought it was a pair of wayward lovers engaging in some pre-nup bedroom rehearsals. The it was like two camels plotting an escape. But it turned out to be some forty guys having a post-mission debrief. They were gathered around a table laden with jugs of wine and plates of roasted meat. "No-See-Sky pork!" "Wu jia pi jiu!" they shouted. Ali Baba had the faintest idea of what they were saying.

Maybe they had been keeping pigs in the cave (as Muslims they were forbidden to eat pork and such. Not to mention the consumption of alcohol). In Arabian, "wujiapijiu" sounded like a fierce swear word, and so Ali Baba decided that these guys weren't exactly school teachers doing cosplay whilst on a summer retreat.

Creeping closer, he counted 40 brigands standing in front of 40 jars. What were those jars for he didn't know. Only that some of those brigands were either standing in them or without.

"Tonight we celebrate," the chief brigand said. "We managed to ship out 40 jars of 'the stuff' to Singapore, with no one the wiser!"

'The stuff' was no other than "belacan shrimp" - a potent spice swooned over by ladies in sarong kebayas in Singapore and Malacca... And some say Penang!

But in fact, no BS was ever transacted. It's all a ruse to launder money and to fence off robbed goods. It's one reason why the sarong kebaya-clad ladies in Singapore and Malacca (and some say Penang) were often so well decked in pearls, silver and gold all the time.

Now, as the night wore deep punctuated by the hoots of three insomniac owls, the 40 brigands slowly drank themselves to stupor and unconsciousness. If an earthquake and tsunami were to happen right there and then, it would be largely ignored and 40 less-than-holy-souls would surely drown.

Ali Baba surveyed the scene before him and caught sight of the gold and silver (and pearl) valuables and decided they were better off on him than whomever they were destined for. Also, such accoutrements would be a plus on his Arabian Idol run-up. No one would suspect that they were real given the flourish of costume jewelry on very episode of AI.  He'd just tell any inquisitive sod that it's all costume jewelry anyways! The rest of the treasures he'd would sell and use the money earned to produce his very own album. He would also need to hire ghost songwriters. Ali Baba was good at posing, not actual work. He was honest about that aspect of himself as.his mind conjured up a young image of his dad in poofed oily hair and turned up collar. Wanker! he cursed.

As he was dreaming away, out of the shadows stepped Morgiana, Ali Baba's maid. "My, my, that's some treasure," she said, not without explicit greed. In her mind, she's already envisioning a life free of domestic duties, perhaps setting up a chain of food joints selling authentic Cantonese soups: a skill she had picked up from working as an "oy yung" or foreign domestic helper in HK for over 10 years.

Of course, she had also picked up skills in squirreling away employer valuables and how charcoal could be of life terminating use outside of cooking. And of course, the ancient Chinese art of pickling.

"Let's dump them in the jars and seal them up," she said, not without glee this time. The gleam in her eyes shining deadly with intent.

When all the jars were sealed, Morgiana made sure the cave was airtight and heaped a pile of charcoal ready for lighting. This would undoubtedly ensure that all 40 of the brigands would suffocate and die.

At last, when the fire was roaring, she stood at the cave entrance and uttered "Close Sesame!" Miraculously, a boulder rolled into place sealing the cave real tight. From behind that, a huge (and probably indentured) Arabian Ghost crab scuttered away, knowing that its days of rock-rolling was finally over. Working for the brigands wasn't exactly a sweet deal. They were a crabby bunch most times.

With the riches moved to Ali Baba's man-cave, Morgiana and Ali Baba set about plotting their futures. 1) An entertainer with his voice; 2) The other - an entertainer with her soup spoon. As last heard, Morgiana is still calling the shots on Ali's career. And as an inside joke, she made Ali name his first album "Chee Mah Hoy!" to the annoyance of an American Idol judge called Simon.