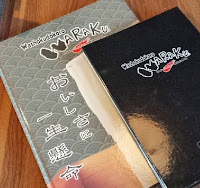 Ok, yesterday was spent food tasting at a new outlet of Waraku, a Japanese casual dining establishment that served not only food from the Land of the Rising Sun (or a version of it) but also some Spanish inspired ones. This outlet is located on the third level of Vivocity beside Marche, at a place nicknamed the Sky Park.

The occasion started off well. I arrived there fashionably late (about 10 minutes) and the SBM foodie group were already two and a half long-tables filled. Organiser Pang (Joo Lip) gestured for me to sit at Javier's table when all I wanted to do was sit beside Faye Chan. We had chatted only on FB and now finally met. Both of us are Cantonese and being the extinct species that we are becoming, I really wanted to explore some makan topics with her.

But Javier and her partner in crime, Nicosia, -as well as Jade and Jayne, turned out to be excellent company. They kept pushing leftovers to me. I dunno. My days of largess eating during NS were already long over, or do I still have the same hungry ghost face? In any case, it was done in good humor and it is always nice to be fed than have food taken away! I hate to waste food (especially veggies) and would finish up any remnant. The dishes yesterday all came in rather tasty sauces and so wiping the plate clean of any leftovers was rather "sedap" and "shiok".

Ok, so what's the verdict? Was the food at Waraku's new outlet worth the trip?

First off, according to Jeslin Ng, the Dy COO & Marketing Head of Waraku (which is part of the Wong San's group), this outlet of theirs at Vivocity is targeted at families and business. A rather strange combination given that the two groups seldom mix except on company Family Day.

But Faye's comment that the food was more for drinking (because of its perceived saltiness) got me thinking this morning that bite-sized dishes do indeed serve both clientele.

The difference lay in the presentation.

Besides, Waraku seem intent on being a business chit-chat venue by building three private rooms for that purpose. They seat 4/8/10 pax each. The restaurant itself could take 100, although how many will stand, I do not know. But the view outside is nice and would make for a pleasant, relaxing cocktail venue.

We were served the signature dishes first, a smart move as our taste buds were not yet adulterated by the many dishes to follow. 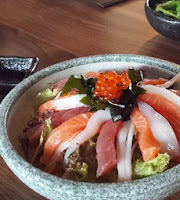 First up was Hekka Salad, a mix of pink/red salmon meat mixed with roe eggs and squid strips all drenched in some dark mirin-like sauce that was flavored with mustard seeds. The salad colors reminded me of the French Lorette salad.

It looked pretty and was delightfully light, a great way to start off a meal! The strips made the salad chopstick friendly and pretty soon, the top ingredients were picked clean off. The only complaint I have is that the lettuce at the bottom was a bit coarse cut. A bit of color and finesse (such as fine chopped oak leaf lettuce or radicchio) would have been better. Coarse lettuce made the dish look cheap. But how to finish off a raw seafood salad is not easy and something worth thinking about. 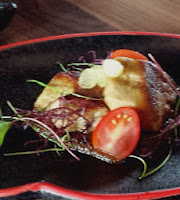 The next signature dish was Foie Gras Miso Yaki. This was smooth with the slightest hint of pan-fry. The sauce was apple sweet and adorned with green pearls that felt like naked mini grapes.On the whole, the texture was very very seductive! My only query is what I should eat the foie gras with. Japanese pearl rice? Toast? Something thin, deep fried? 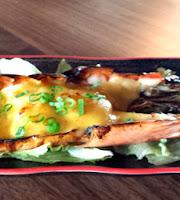 We were next presented with the Ebi Miso, a grilled prawn split and laid in with what seemed like egg white, cheese and salted egg pumpkin sauce. Although looking rather small (not lobster sized) it was nevertheless buttery and creamy. I took bits off near the head and the taste was pretty rich. If this was made available at a BBQ, I would have gobbled down a few, never mind the cholesterol they would induce! 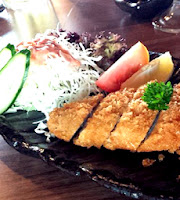 Next up was the Kurobuta Tonkatsu or breaded pork cutlet. On its own the pork was nice, not overly done. The brown sauce made a decent thing of the meat but it did not add excitement. The shredded radish condiment with sauce and mayo cooled the heaty fried taste, but I rather like a pork cutlet that has oomph, one that makes bold oink-oink statements on my palate. Perhaps I'm too used to the Cantonese pork cutlet ways. And the Kurobuta Tonkatsu reminded me of char siew. There are two types: white meat char siew and dark meat char siew. This KT was dark meat char siew, which would have been wonderful with a bit of yellow plum sauce or "lam yu" (preserved bean curd in sweet sauce).

Still, it could work as a good dim sum dish.

Now, with the signature dishes out of the way, the rest of the dishes lined up to be served like the Seven Dwarfs waddling in and making us wonder who is Salty, Sweet, Sour, Bland, Bashful, Coy and Sneaky. But not before we were given a tour of the premises. We walked past the kitchen and waved to the friendly chefs. Ms Ng then introduced each of the private rooms. They were simply furnished in cherry wood color and on the far wall, a piece of framed embroidery fabric that reminded of rich, traditional Japanese kimono designs. 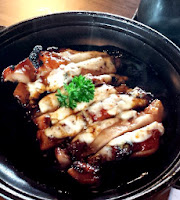 The Teriyaki Cheese Chicken was well grilled and floated on a puddle of sweet dark sauce that cried out for some white rice. So I informed my fellow tasters and we ordered three bowls to share. The effect was immediate. Yes, the dish needed rice, Sherlock! On its own, the flavours were too strong. A kid will probably find the dish especially memorable (with rice). I can foresee one reminiscing about it in his later years. I had the same experience once with Kung-Po Chicken. A dish you wished your own mom cooked like, every other day!

Over the next half hour or so, we had Maki Volcano, Potato Mentai and Miso Yuzu Pork. Needless to say, MV looked to have been designed for kids. Our table was unanimous with the Potato Mentai, a baked gratin dish that was crispy on top, soft and moist with salmon and cream cheese in the middle, and lastly a bottom layer of potato done just right. I think it was a dish we all could polish off on our own...so good it was! It reminded me of a seafood ciabatta sandwich I had once in Dover, England. The flavours were at once crabby, salmony - all fused into one creamy paste (of course, minus the potato then). It was indulgent, like lying next to a fair skinned, soft fleshed beauty who has nothing but encouraging words to whisper into your ear while you masticated. (Note the correct spelling, LOL)

Now the Miso Yuzu Pork needs some careful handling. Why? Some folks liked it, some folks didn't: they found it plain. I could taste the difference in meat texture and some flavour, which I think would be lovely with beer, typically. But with the added brown sauce, the meat became overwhelmingly salty. I think eating bits of it does it no service. Yuzu pork must be eaten in chunks to be satisfying. It's like you don't pinch a fat lady, you hold her tight and wobble in her largess! And afterwards down copious amounts of beer to forget the experience (and grab the next fat lady). I would grow a huge moustache just to have beer drip down from it to look immensely satisfied!

As the afternoon drew long, the next dishes came quickly one after the other. 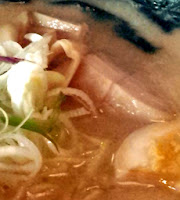 The next dish was the Ramen Tonkotsu, that soupy noodle with the three layered pork. A chef can almost do no wrong with this dish. It is one of my favourites aside from the one served with corn and seaweed. I can even say it is my comfort food! Finish a bowl and the whole world takes on a happier hue! This one from Waraku was competent but with a slight difference. The meat is cut up into small blocks like sio bak (local roast meat) - not the typical half-round shape where one could fold the sliver of meat into the mouth for that wanton, meaty feeling. Nevertheless, the fat and skin layers of the pork blocks were expertly done and QQ smooth.

The broth, to me, was, as usual, the same uplifting flavour expected from a good tonkotsu. I would, however, prefer a more generous presentation of veggie condiments atop the noodles. It would give the dish a less plain look.

Now, here comes the unique selling point of this Waraku branch at Vivocity. They serve up Spanish dishes too. Now upon our table came two pans of paella rice: one meat, one seafood. The rice in both the pans looked the same, fat and squishy grained. They tasted different though. The meat paella rice was somehow bitter. But really, both the rice in these dishes looked more like "lo mai fan" (i.e. Chinese glutinous rice) than the yellow paella rice I am familiar with. Odd. Do kids prefer them this way? Well, the meats on top were well cooked. Only the mussel in the seafood version was a bit overdone and rubbery at our table. These dishes were competent but not what I would call adult food. Adult paella I would demand a more faithful rendition like those from Spain; rather than this modernised 'city' version. Rural paella is altogether something else to behold! Ingredients peeking out from the rice infusing it with their own intrinsic flavours. Over here, the paella ingredients seem scooped on top, the rice flavour reminiscent of artificial seasonings.

I could be wrong as the dish was second last. By then we were too full to want to sample more or analyse further. 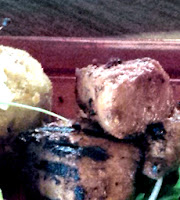 The last dish was the meat-kebab combi. There was Chicken Croquette, Kebabs and Tomato Meatball. We all found the meatballs salty. I think a better dressing would have been some yogurt concoction. It would then be perfect and luscious, diluting even some of that saline sharpness. Well, the meats looked more like dim sum for drinkers, so we were not surprised by their flavours. It's known that salty food = more drinks sold, haha.

Conclusion: Right, so what is the final verdict? Food-wise just let me say that what we were served and had sampled were but a small portion of the total menu; there were lots more to choose from. What we had were the best selling items. I can see why: many of them have delicious sauces and creams that make eating out memorable. But consume them too often and it becomes "jelat" and harsh on the palate. The food at Waraku Vivocity is better than decent, so I would give it a 8/10. It is food one should fill a whole table with so one could sample a bit of this and that, given too the a la carte size of the dishes. I would equate casual dining to Food + Talk, so bite-sized chunks would work in that paradigm. As for the Spanish dishes, I think the paella rice is a good Oriental link given our staple Asian diet, but really, a lot of more (I feel) can be introduced, especially the tapas sort. It would be great for casual business, walk-in diners too; those who want to eat a little, chat a lot. For families, a place perhaps to introduce some fine dining ideas to the young ones, slightly complex dishes they can experience and delight over. Or even try cooking for themselves at home.

End [Note: All pictures here my own, taken with a Samsung Galaxy S4 (not my usual cam but convenient!)]